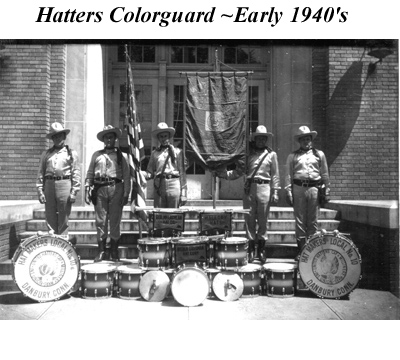 My knowledge of the history of the Hat Makers Drum Corps, AKA, The Hatters Drum Corps, is derived for the most part from long-ago discussions with my father, other members of my family that were also one-time members of the corps and probably some memory of conversations with Jesse and Gussie Saunders.

As I recall the story: probably in 1938, Jesse Saunders after a dispute with the American Legion Drum Corps (now The Danbury Drum Corps), and with the sponsorship of the Local 10 Hat & Millinery Union, started the Hat Makers Drum Corps. Jesse at the time was an employee of the hat manufacturing industry and a Local 10 member. Initially, the majority of the corps membership were employees of the Danbury, Ct hat maker factories; primarily the Mallory of Fifth Avenue plant.

As far as Jesse’s selection of a western style uniform: I can speculate that it may have been the fact that the “singing cowboy” movies were popular at that time. But more obvious was the fact that Jesse worked for Mallory of Fifth Avenue Hat Company which, at that time made the fine Cowboy hats for the Stetson label. Another possibility is that Jesse Saunders may encountered at a parade the great all-female drum and bugle corps, The Bon-Bons of Audubon, New Jersey, which was formed contemporaneously with the Hatters Drum Corps. But I haven’t been able to confirm that New Jersey corps had the Western style uniforms in 1938, when that corps was formed.

The hatters started humbly, equipment-wise (notice the rope-tension drums in World’s Fair portrait)but by the late 1940’s and with the last uniform configuration, it was commented that the Hatters was the best-equipped corps in the country!

The Hat Makers Drum Corps over the 20 short years of its existence had many instrumentation configuration, where it would be classified by the drum corps associations at the time as, initially, a drum and bugle corps (see 1939 Worlds Fair Portrait), evolving to a fife, drum and bugle corps, then a combination drum corps, with the replacing of bugles with trumpets, and the addition of glockenspiels.

By the time of my joining the corps in 1956, the corps was much smaller that the previous units, and again a drum and bugle corps. The glockenspiels remained.

The corps performed at many interesting venues. The most memorable ones would have to be the 1939 New York World’s Fair and the 1949 Inaugural parade for Harry S. Truman. (The story goes that the Connecticut Governor’s Foot Guard was incensed that the Hatters was chosen to represent the state rather than they.

In 1940, the Hat Maker Drum Corps join the Connecticut Fifers & Drummers Association, possibly the first drum corps competition association in the country, having been organized, officially in 1885 (there is some thought that this date was a reorganization of an earlier entity, since there were earlier Connecticut state conventions in the 1870’s).

The Connecticut Fifers & Drummers Association actively held contests into the 2000’s. But no more.

They remained until the 1960 corps disbandment as members of the Hudson Valley Drum Corps Association.