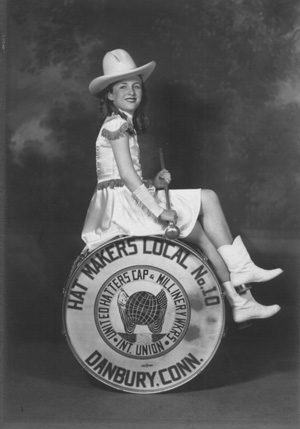 I was blown away when my father, many years ago, showed me the photos of the pretty majorette of the early hatters drum corps, Arlene Skippy Hall. These photos, which I inherited, and are seen throughout this website and were subsequently donated, along with other Hatters Drum Corps memorabilia, to The Drum Corps Heritage Society

Incidentally, my father was a founding member of the Hatters Drum Corps in the late 1930’s (and I was a member of the 1960 final year corps).

When I first developed the original Hatters Drum Corps website in 2005, a drum corps friend found that Arlene was still alive and living in Florida. This friend is of bold character and had the courage to call her and tell her about the website. (Not something I could do). Sadly, I never received feedback from Ms Sinsar (Hall).

I was both surprised and saddened when my friend, as described on the home page, had sent me the her obituary. Surprised she lived so long, since so may years had passed since first knowing Arlene was alive in 2005, and sad, obviously that she indeed had died.

Click on the link below to see her obituary: